Towards the algorithms - Introductory thoughts

Upfront: there exists no mathematical formula that can (simply) calculate the optimal warehouse position given customer locations and demand. So...

Imagine a case with two customers only. Customer A has a demand of 10 and customer B of 1. Where is the Center‑of‑Gravity? Somewhere on line A-B, closer to A?

* If put between quotes then it refers to a location under investigation which is not yet the true Center‑of‑Gravity.

So, the Center‑of‑Gravity is right on top of customer A, not somewhere in between A and B!

However, the sum of weighted distances will only decrease if the 'Center‑of‑Gravity' moves the right distance! The resultant pull force does not tell how far to move. Move this far?

The smaller the move distance, the less chance of 'overshooting' the Center‑of‑Gravity, but the many more moves to be made. Therefore, it is better start with big moves. In case of 'extreme overshooting' the sum of weighted distances will have increased instead of decreased, and the resultant force arrow changed - or even completely reversed - its direction. By then, the move size needs to be reduced in order to get closer to the Center‑of‑Gravity. Else, the next move would end up at the previous position, followed by getting stuck in a loop of going back-and-forth without ever getting any closer. By reducing the move size each time the sum of weighted distances increased the 'Center‑of‑Gravity' ends up on top of the Center‑of‑Gravity. 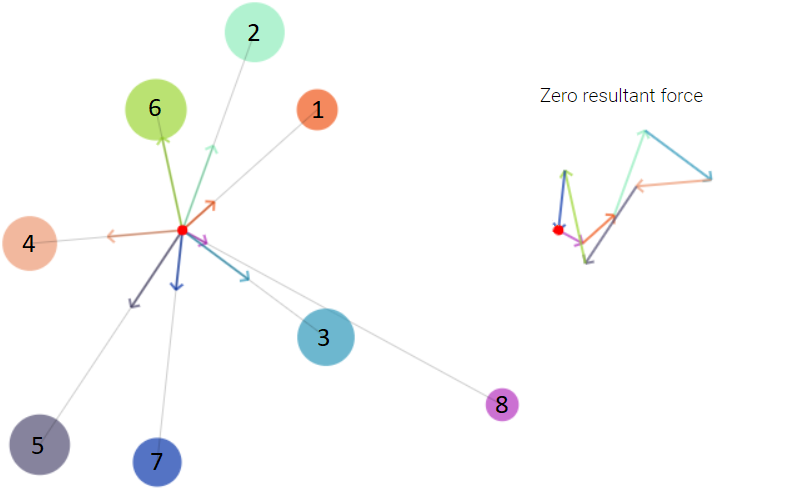 * Except if one dominant customer outweighs all other customers. Then the resultant force never becomes zero. Another exceptional case, rather theoretical, is one in which there are only two customers, A and B, with equal demand. Then the resultant force is zero for all points between A and B on line A-B. Each of these points is Center-of-Gravity.

The Single-Center‑of‑Gravity algorithm works like this on an x,y plane:

Often 0-5% worse. But worse is possible.
Often, the sum of weighted distances of the weighted average x,y position versus that of the true Center‑of‑Gravity will be 0-5% worse, but more than 5% worse is also possible, as sometimes will happen/can be seen in the simulation further below.

This algorithm will always find the global optimum with a single run. With this type of problem, there is no chance of getting stuck in local optimum. The algorithm relates to the gradient descent method (wikipedia), also used by Excel Solver's method GRG Nonlineair (GRG stands for Generalized Reduced Gradient).

Determining the Center‑of‑Gravity is like finding the x and y coordinate of the lowest point (x,y,z) in a bowl-shaped 3D‑chart - visualizing the sum of weighted distances z = f(x,y) for each x and y - by going into the direction of steepest descent as pointed to by the resultant pull force. During this descent the direction gets adjusted after each move made/step taken.

Wikipedia presents complex methods to determine a proper move distance (a.k.a. step size) per iteration. Luckily, there is no urgent need for those, because the method of step 3 works quite good! 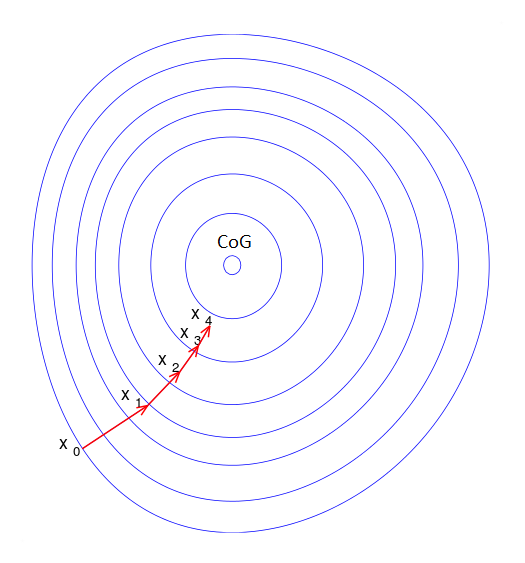 Press button Next process step to start the simulation.

Earth is a globe - Required adjustments 
Differences between both algorithms

Below, 'Center-of-Gravity' and warehouse are used interchangeably.

A single run of the Multiple‑Centers‑of‑Gravity algorithm does the following:
Multiple runs are done to find the global optimum, as a run may get stuck in a local optimum. The more runs, the more likely the global optimum is found. Usually, this global optimum will then have been found multiple times as best solution. The warehouse locations of the best solution found are considered to be the Centers‑of‑Gravity. But - especially with a higher number of warehouses - it may happen that two different warehouse structures bring an almost similar sum of weighted distances.

The algorithm resembles the k-means clustering algorithm (wikipedia) used for cluster analysis in data mining and machine learning, as depicted on the left.

The animations show what happens during a single run of this algorithm. Customers are assigned to their closest warehouse, warehouses move to the center‑of‑gravity of their assigned customers, customer are reassigned, warehouses move, et cetera, until the final situation is reached where none of the customer assignments change anymore, and none of the warehouse positions.

Although each run starts with different random locations, the solution found (global optimum with a minimal sum of weighted distances) is the same in the first three run examples.


The example below shows a run that got stuck in a local optimum. Therefore, multiple runs need to be done to find the global optimum.

A completely different approach is one in which a set of hundreds or thousands of possible warehouse locations are pre-generated, after which the k best ones are selected (see Combination - wikipedia). Advantage is that the warehouse-customer cost matrix can be based on various transport rate structures and can capture warehousing costs. Disadvantages are that it requires many more inputs (and still has the risk that the set of predefined locations may not contain the optimal locations), and that the number of possible warehouse combinations - thus runtime - may grow exponentially.
Web app Warehouse Selection Optimizer facilitates this approach.

Besides, as-the-crow-flies distances × circuitry factor are used as approximation of road distances. What is meant with road distance? The distance of the fastest or the shortest route? The fastest route is usually more relevant, as driver and truck cost are more time-related than distance-related. But the fastest route may depend on the time of the day, and on the day of the week. Reality is complex. As the estimation errors will be more or less the same for each direction, approximations are acceptable, and commonly used in supply chain network design software.

Of course, transport costs are only a part of supply chain costs. The optimal number of warehouses and their locations are driven by many quantitative and qualitative factors such as (future) transport and warehousing rates, future demand (and supply), lead time requirements, inventory effects, supply chain risk/redundancy, contractual obligations, distance to parcel/logistics hubs, workforce availability/public transport connections, et cetera.

Nevertheless, it is common practice to run a Center‑of‑Gravity-analysis to get a view on which logical warehouse locations to consider in a supply chain network design.